What is alcohol use disorder (AUD)?

For most adults, moderate alcohol use is probably not harmful. However, about 18 million adult Americans have an alcohol use disorder (AUD). This means that their drinking causes distress and harm. AUD can range from mild to severe, depending on the symptoms. Severe AUD is sometimes called alcoholism or alcohol dependence.

AUD is a disease that causes:

What is binge drinking?

What are the dangers of too much alcohol?

Too much alcohol is dangerous. Heavy drinking can increase the risk of certain cancers. It may lead to liver diseases, such as fatty liver disease and cirrhosis. It can also cause damage to the brain and other organs. Drinking during pregnancy can harm your baby. Alcohol also increases the risk of death from car crashes, injuries, homicide, and suicide.

How do I know if I have an alcohol use disorder (AUD)?

You may have an AUD if you can answer yes to two or more of these questions:

In the past year, have you:

If you have any of these symptoms, your drinking may already be a cause for concern. The more symptoms you have, the more serious the problem is.

What should I do if I think that I might have an alcohol use disorder (AUD)?

If you think you might have an AUD, see your health care provider for an evaluation. Your provider can help make a treatment plan, prescribe medicines, and if needed, give you treatment referrals.

Alcohol use disorder is a diagnosis made when an individual has severe problems related to drinking alcohol. Alcohol use disorder can cause major health, social, and economic problems, and can endanger affected individuals and others through behaviors prompted by impaired decision-making and lowered inhibitions, such as aggression, unprotected sex, or driving while intoxicated.

Alcohol use disorder is a broad diagnosis that encompasses several commonly used terms describing problems with drinking. It includes alcoholism, also called alcohol addiction, which is a long-lasting (chronic) condition characterized by a powerful, compulsive urge to drink alcohol and the inability to stop drinking after starting. In addition to alcoholism, alcohol use disorder includes alcohol abuse, which involves problem drinking without addiction.

Habitual excessive use of alcohol changes the chemistry of the brain and leads to tolerance, which means that over time the amount of alcohol ingested needs to be increased to achieve the same effect. Long-term excessive use of alcohol may also produce dependence, which means that when people stop drinking, they have physical and psychological symptoms of withdrawal, such as sleep problems, irritability, jumpiness, shakiness, restlessness, headache, nausea, sweating, anxiety, and depression. In severe cases, agitation, fever, seizures, and hallucinations can occur; this pattern of severe withdrawal symptoms is called delirium tremens.

The heavy drinking that often occurs in alcohol use disorder, and can also occur in short-term episodes called binge drinking, can lead to a life-threatening overdose known as alcohol poisoning. Alcohol poisoning occurs when a large quantity of alcohol consumed over a short time causes problems with breathing, heart rate, body temperature, and the gag reflex. Signs and symptoms can include vomiting, choking, confusion, slow or irregular breathing, pale or blue-tinged skin, seizures, a low body temperature, a toxic buildup of substances called ketones in the blood (alcoholic ketoacidosis), and passing out (unconsciousness). Coma, brain damage, and death can occur if alcohol poisoning is not treated immediately.

Chronic heavy alcohol use can also cause long-term problems affecting many organs and systems of the body. These health problems include irreversible liver disease (cirrhosis), inflammation of the pancreas (pancreatitis), brain dysfunction (encephalopathy), nerve damage (neuropathy), high blood pressure (hypertension), stroke, weakening of the heart muscle (cardiomyopathy), irregular heartbeats (arrhythmia), and immune system problems. Long-term overuse of alcohol also increases the risk of certain cancers, including cancers of the mouth, throat, esophagus, liver, and breast. Alcohol use in pregnant women can cause birth defects and fetal alcohol syndrome, which can lead to lifelong physical and behavioral problems in the affected child.

Treatments and Procedures Related to Alcohol Use Disorder

Note that every provider listed below may not perform or prescribe all treatments or procedures related to Alcohol Use Disorder. Review each provider for availability.

Areas of Expertise for Alcohol Use Disorder 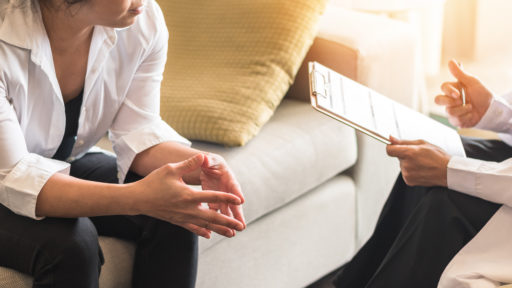