Having your shoulder replaced can be a big step for many people, but what can be done if you have a torn or damaged rotator cuff? Dr. Wesley K. Cox, an orthopaedic surgeon with UAMS Health, discusses a different kind of procedure. The so-called “reverse shoulder replacement” is an option to provide relief to many patients for whom a traditional replacement is not an option.

For an arthritic shoulder that does not have an intact rotator cuff, or in some cases, severe fractures of the shoulder, or finally, in rotator cuff tears that have had efforts at repair that haven’t healed, or tendons that aren’t repairable, there’s another option called a reverse shoulder replacement, which is designed to basically recruit a muscle — the deltoid — to do something that it’s capable of but never really had to do before. It’s a trick. Basically, it’s a physics equation that we use to our advantage.

So when the rotator cuff tears — whether you have arthritis or not — if it tears significantly enough, when you try to raise your arm, the head just drifts north. What I tell patients is it’s exactly like trying to lean a dolly back that has a lot of weight on it without putting your foot on the crossbar at the bottom. If if you’re trying to pivot around a wheel that’s going to move, you have to have something that stabilizes it. In the shoulder, that’s the rotator cuff. So when you go to raise your arm, the rotator cuff pushes it down, depresses the head so you can raise it up. When you don’t have that, you can’t do a regular shoulder replacement. Because if you do, you put a new ball and a new socket, but when you try to raise your arm, it’s still going to slide up.

And so the reverse shoulder is truly that. We reverse the ball in the socket. So in a normal shoulder, if this is the socket and this is the ball, the forces want to push the head north when the tendons pull. So we put a ball where the socket was and a socket where the ball was. And now, when those same forces try to drive the ball up, which is now the socket, it will just pivot around it. And so the deltoid muscle, which attaches right out here, can raise the arm by pivoting this socket around the ball. And so we take this force — which is sort of a sheer force — and turn it into a compressive force and it just spins around the ball. This is your foot behind the dolly, and the wheel can just pivot around it.

The reverse shoulder, when used for the right conditions, is a game-changer because it’s an answer that we didn’t have previously. It’s especially important in fractures. So where we used to try to piece together three, four, five, six different pieces of bone in a 75-, 80-, 85-year-old person, it can be very difficult to predictably get that to heal. Not only that, but it’s a slow, painful process. Using the reverse shoulder in conjunction with getting those pieces of bone back where they belong now allows us to answer that for patients and have a much better chance than we ever had at getting their motion as normal as possible.

The key — if I could emphasize anything — would be to make sure that you seek treatment with someone who does a lot of shoulder replacements. And the data is surprising to most patients. But upwards of 90% of the shoulder replacements that are done in the United States every year are done by a surgeon who does one or fewer that year. And what I tell patients is, “Look, I don’t have to be the one that does your surgery, but if you’re in my family, seek someone out who does a lot of shoulder replacements if you’re contemplating having that done.” And I think when you do that, you’ll be more successful at non-operative treatment options, first of all. But if you do have a surgery, we’ll make sure that the right surgery is chosen for you so that you give yourself the best chance at the shoulder you’re having a surgery for in the first place. 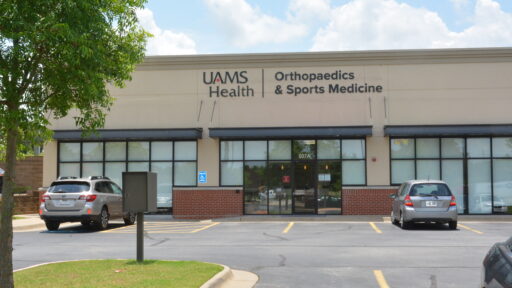 UAMS Health is recognized nationally and internationally for its expertise in orthopaedics. 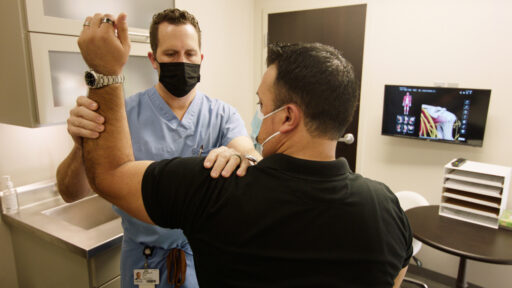 At UAMS Health, our fellowship-trained orthopaedic surgeons are leaders when it comes to the diagnosis and treatment of shoulder and elbow issues.