A prognosis is a statement about the prospect of surviving and recovering from a disease. It may sound harsh to ask the question, “Can I survive this?” But it’s a question on most people’s minds when they are facing a diagnosis of lung cancer. And the answer can be just as hard as asking the question. The decision to ask about your prognosis is a personal one. It is up to you to decide how much you want to know.

The chance that you will recover or have the cancer come back depends on these things:

Before discussing your prognosis with you, your doctor carefully considers all factors that could affect your disease and treatment. Your doctor may then predict what seems likely to happen. To do that, the doctor looks at what researchers have found out over many years about thousands of people with cancer. When possible, the doctor uses statistics based on groups of people whose situations are most like yours to make a prediction.

If your cancer is likely to respond well to treatment, your doctor will say you have a favorable prognosis. If the cancer is likely to be difficult to control, your prognosis may be unfavorable. It is important to keep in mind, though, that a prognosis states what is probable. It is not a prediction of what will happen to you. No doctor can be absolutely certain about your outcome.

As a cancer patient, you face many unknowns. So does your family. Some people find it easier to cope when they know their prognosis and the statistics for how well a treatment might work for them. Other people find statistical information confusing and frightening. Or they think it is too impersonal to be of use to them. The doctor who is most familiar with your situation is in the best position to discuss your prognosis and to explain what the statistics may mean for you. At the same time, keep in mind that even your doctor cannot tell exactly what to expect. In fact, a person’s prognosis may change. A favorable prognosis can change if the cancer spreads or comes back. An unfavorable one can change if treatment is successful.

What does the five-year survival rate mean?

Some people may live much longer than five years after they are diagnosed. Also, because the statistic is based on people diagnosed and initially treated five or more years ago, it’s possible that the outlook could be better today. People who are more recently diagnosed may have a more favorable outlook. That’s because of improvements in the way cancer is treated.

Survival rates are based on large groups of people. They cannot predict what will happen to a particular person. No two people are exactly alike, and treatment and responses to treatment vary greatly.

What are the survival rates for people with lung cancer?

Lung cancer is often difficult to cure, especially if it has already spread outside of the lungs. But even in these cases, treatment can often slow the growth of the cancer or even shrink it for a time. This may help ease symptoms, improve your quality of life, and help you live longer.

These are the facts about lung cancer, according to the National Cancer Institute. The five-year relative survival rate is the number of people who live at least five years after their cancer is diagnosed. This rate is adjusted to account for people who die from other causes.

The five-year relative survival rate is about 54 percent for people whose lung cancer is contained in the lung tissue and has not spread to other organs or lymph nodes. However, only a small percentage of people with lung cancer are diagnosed at this early stage.

People whose lung cancer has grown into other nearby structures or has spread to nearby lymph nodes have a five-year relative survival rate of about 26 percent.

If the cancer has spread to distant sites, the five-year relative survival rate is about 8 percent. 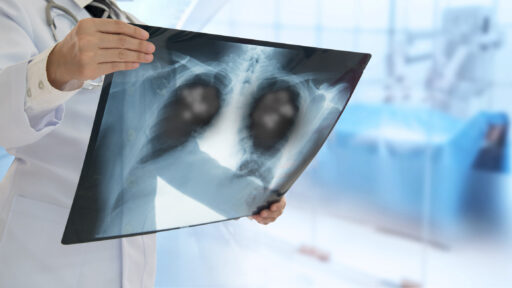